Jake never naps.  He hasn’t napped since he was less than two years old, and even then, I had to be right there next to him or he didn’t sleep long.  Today, he told me he wanted to go to sleep in the middle of the day.  Now, granted, he had just had a traumatic event for a six year old (he decided to wash his own hair in the shower and got shampoo in his eyes which meant he screamed like a banshee for the few minutes it took me to get it out of his eyes, and then I had to lay him across the kitchen counter to get the rest of the shampoo – probably half a bottle – out of his hair).  He did climb up on my lap though (again, not normal for him), and he put his little damp freshly shampoo scented head on my shoulder, and he was out for at least three hours.  I was stuck; I couldn’t move, and I didn’t want to, so I slept, too.  THREE HOURS is a long time to take a nap in the middle of the day!

Tonight, we were still awake at midnight.  We wanted a snack.  I was pinning recipes and barn pictures, and I ran across a granola recipe.  We decided to make this one: http://www.anoregoncottage.com/2009/04/pantry-basics-granola/

He helped me measure out ingredients, and then he went to the couch to watch “Word World” on PBS while I cooked the sugar mixture and put it all into the oven. 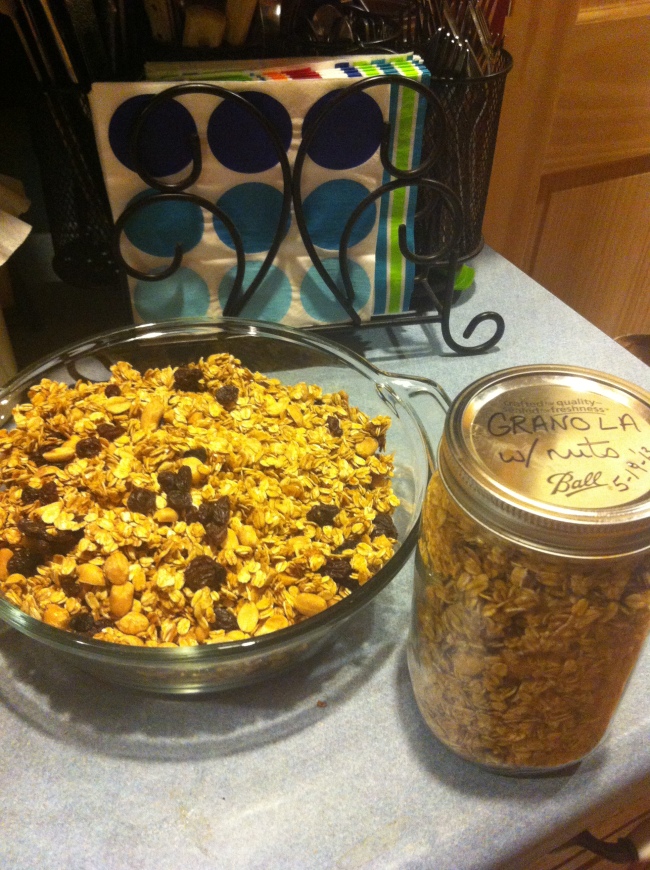 The big dish is full of granola with peanuts and raisins added.  The jar is waiting to be claimed by Sahara in the morning, and it just has peanuts added.

Just a little warning – if you spread the granola too thinly on a baking sheet, and you hear the oven timer going off but don’t immediately get up to take it out of the oven, the batch on the thinly spread baking sheet will burn.  That is a picture of burnt granola.  It doesn’t look terrible; as a matter of fact, I didn’t realize it was burnt.  I just thought it got a little more brown because maybe it had more of the sugar mixture on it.  I was wrong, so terribly wrong.  Burnt granola is DISGUSTING.  The goats will be happy with my mistake when I go out to feed them tomorrow morning.

Of course, I had to try the other (good) granola.  It works very well as a cereal!  I think it needed just a tablespoon more cinnamon and about a cup more sugar.  What can I say?  I like my cereal to be SUH-WEET!!!  Yes, I also like just a little bit of coffee with my sugar and milk.

Jake did not taste test his granola batch.  This is what I found after the twenty minute baking time was finished: