Recycling on the farm is a little bit different.  For example, things just don’t get thrown out here at Striving Acres.  This tends to lead to a lot of clutter when you have tons of wonderful ideas (and just not enough time to get all those ideas actually into reality!).  I do try to keep the clutter to a minimum (for example, I only fill up the garage – I don’t let myself start stacking things around the outside of the garage, too – HA!).

One of the great things I just realized about fall and Facebook though is that I suddenly had access not just to my pumpkins I decorated with but to all of my friends’ pumpkins as well!  I put out a small blurb on Halloween on my Facebook page, asking local friends to give me a yell if they had any pumpkins or jack-o-lanterns setting around that they were going to toss in the trash.  I received a bunch of replies!

Today, I think I picked up the last of them.  Erica gave me 23 pumpkins.  TWENTY-THREE!  I counted them when I got home and was happily shocked.  That’s another 23 days of pumpkins for my hens, goats, and Bessie!  They love them.  I still have several on the porch steps waiting to go to the animals so these went into the garage to keep them safe from the frost.  Erica had put a few in a bag since she felt that they were getting a little too mushy; I tossed those straight into the chicken run.  They are happily spending the afternoon picking and pecking through all those mushy pumpkins. 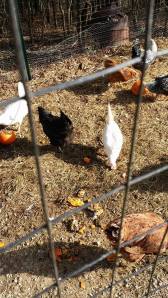 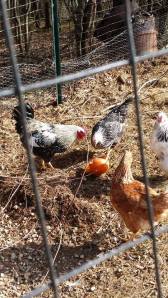 Ted and the kids will be saying thank you next week when I take that one tiny pumpkin and turn it into an apple butter pumpkin pie with streusel topping!