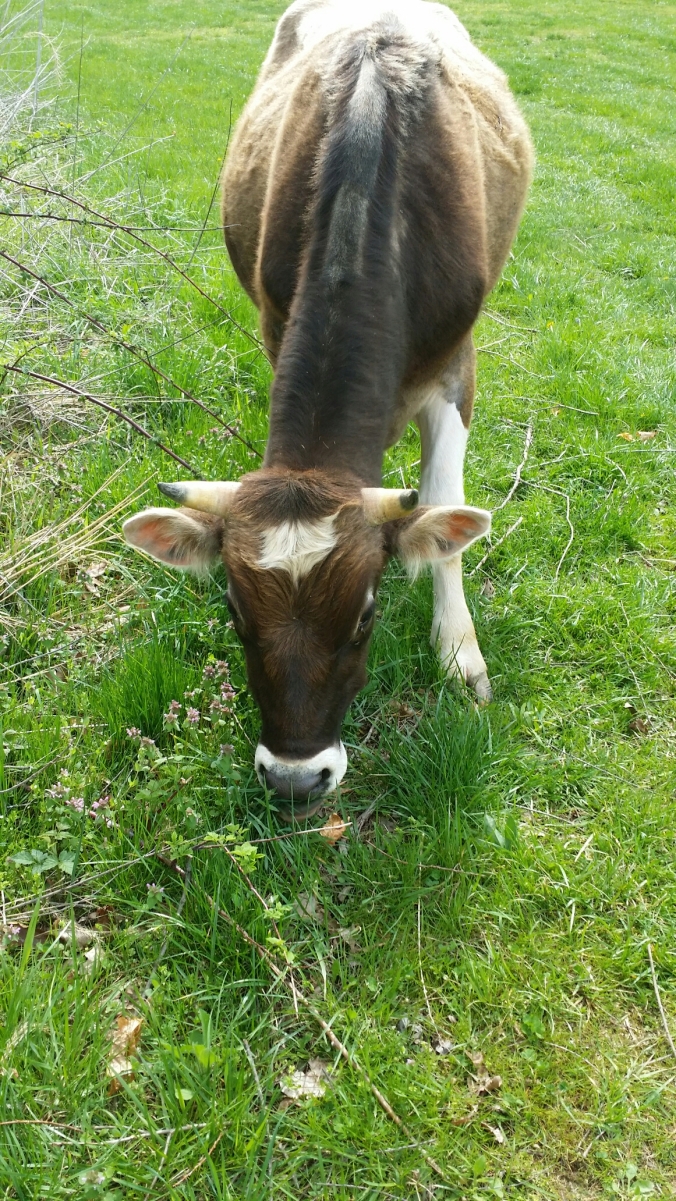 We knew we had a real problem. Beef is a bull, and he can’t run loose. He could cause a car accident if he went on the road, and he could destroy a neighbor’s garden or vehicle or property by eating it or scratching his horns on it.  The biggest worry was that he could hurt somebody – seriously – whether it was intentional or not; just because he’s been mild mannered to date doesn’t mean he’ll stay that way. 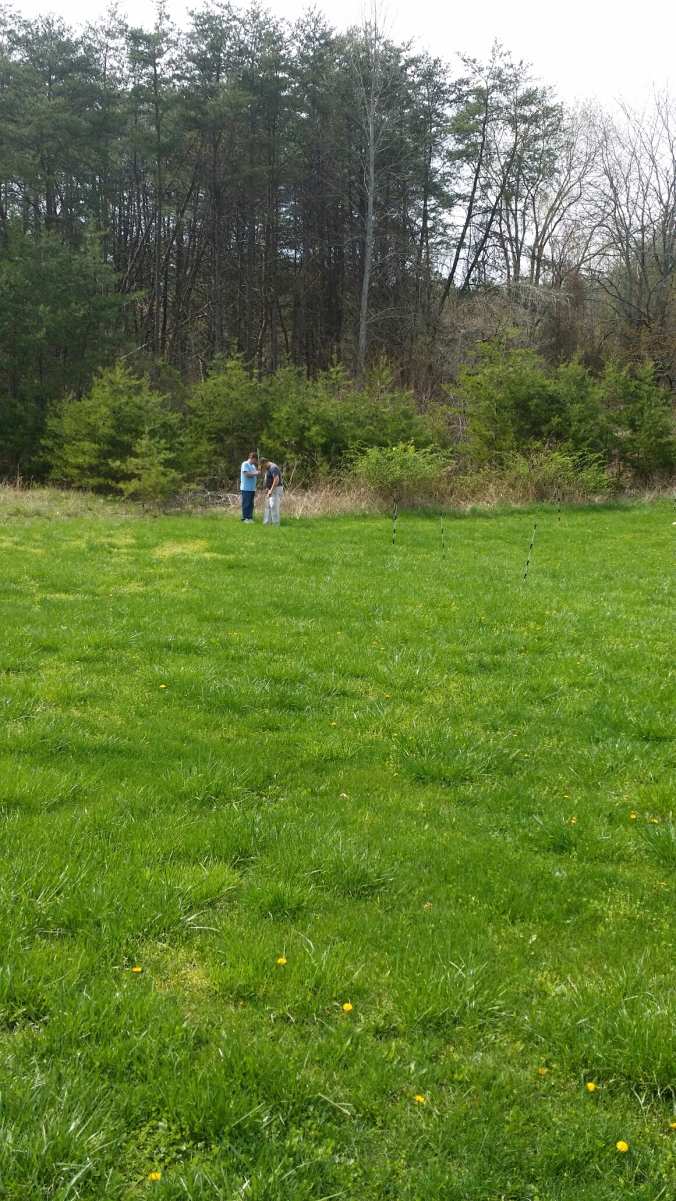 I was convinced he was hopping the pasture fence because the grass WAS greener on the other side. Ted agreed to try my idea of a temporary  electric fence for Beef. It was good timing…while we were picking up supplies Saturday, Gramma called to say Beef was loose again (fourth time in less than a week!).

DG supervised it all and chased Goat away from the flowerbeds all day. Ahhh, yes…Goat was loose, too!

Ted and Dad started outlining an area with step in electric posts on the back corner of Gramma’s property and onto the new ten acres we purchased in December.  My job was to keep Beef off the road and away from vehicles in the driveway.  I definitely had the easier job.

Dad sharing a pretzel with Beef

Setting electric fence was something new for us. Ted had to watch a few videos (YouTube is such a wonderful resource to have!), and then he got all the polyrope run and grounded. Jewel (the most helpful person ever at our local Tractor Supply Store) told us how to hook up the DC charger and house it inside a green Rubbermaid tub to protect it and the car battery from the weather.

Beef and Goat headbutting and playing on the trailer together

Beef must have been kept in an electric fence before we got him. He saw the rope and didn’t try to walk through it. He went around the outside (he’d been wandering around four acres of yard all afternoon munching on grass here and there as he pleased) and followed the perimeter all the way to Ted (he loves Ted). He went inside the fenced area just as Ted finished the fence and hooked it up. Beef touched it once and after that, left it alone.

The funniest part of this was that before Beef touched it, Ted wasn’t sure the fence was hooked up correctly because the tester wasn’t registering anything. He didn’t want to touch it, but he didn’t want Beef to tear it down. Finally, Ted smacked it with a finger – super fast. Nothing. He did it a couple more times. Nothing.

Waiting on Ted to bring his water bucket down

“This thing isn’t working!!!” he yelled, and he rested his hand on it.

Folks, we learned an important farm lesson.  Evidently, electric fences pulse in a circle. He was hitting it between pulses. When he rested his hand on it, it zapped him. He jerked his hand away, yelled a few choice words, and danced all over that field. I laughed so hard I almost peed my pants!

I have it on video, but he won’t let me share it.

“Too bad…it was super funny! Even I laughed!”

At any rate, it’s been over 24 hours since an escape attempt. I think it’s a success!

Keep your fingers crossed for us….