I have bipolar organization disorder (as anybody who knows me can also swear): I swing from hyper organized to OMG where are my keys mode.

I had two rooms in the house that were totally junked up and looked like the back room at Goodwill right before the cut off date for tax claim purposes. I have two adult kids coming home for Christmas so I decided to just have one junky room and set up two guest rooms for them.

The long and short of it is this story you’re about to hear. My helper/gopher, Josh, and I were down to almost the end of cleaning out the crap craft room. I opened a chest and found a huge plastic grocery sack of Easter Eggs.  I thought briefly how happy I was to find these empty eggs. Score! Money saved!…and then I lifted the bag and realized these were FILLED Easter Eggs…and then I realized these were the LOST EASTER EGGS FROM TEN YEARS AGO. 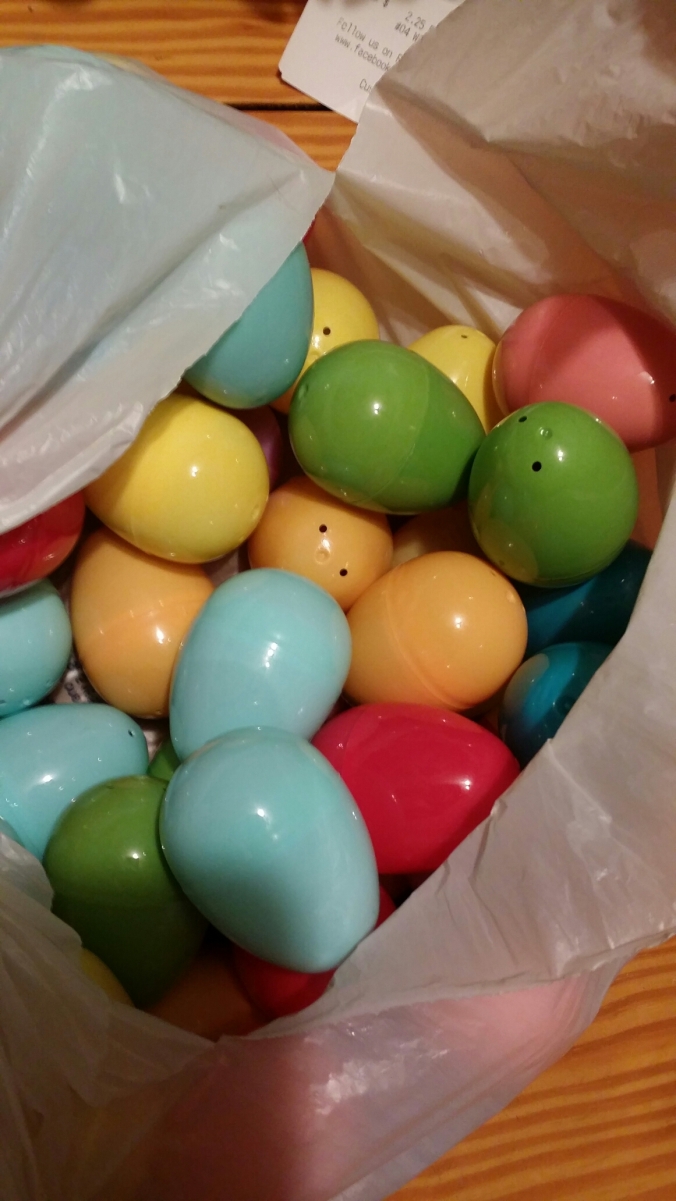 Ten years ago when Sahara was five, I was hyper organized that spring. I had the Easter church clothes bought and pressed for church, the baskets made up and wrapped, and the dinner in the crockpot and bread machine as we headed to church.  I also had about 100 filled eggs, stuffed the weekend before, sacked and ready to hide.

I couldn’t find the sack. I tore the house apart. I cried and cried. We finally told Sahara the bunny was running late that day while Ted raced to Walmart  to buy stuffed eggs. Janeesa threw them from the bedroom window into the yard.

I opened that chest tonight, ten years later, and there were those eggs. Josh laughed and took two to Sahara and her boyfriend in the other room, asking if they wanted ten year old candy. We emptied the eggs (some had coins in them because here the Money Bunny, Easter Bunny’s cousin, visits, too), and tossed the rest.

While taking her boyfriend home tonight, I told them the story about the eggs. There was dead silence, and then they started yelling about eating the jellybeans in those eggs.

They ate ten year old jellybeans! They freaked out all the way to town. They were sure they were going to die. I laughed so hard I almost peed my pants. It was HILARIOUS! If I could’ve taped that, it would’ve gone viral. Some company would’ve bought it and used it for a commercial like that piano playing cat. I haven’t laughed that hard in a LONG time. I had tears running down my cheeks, and the more they freaked out, the harder I laughed.

Moral for Sahara: don’t eat any candy an older brother (because Josh might as well be Sahara’s older brother – he’s known her since she was born) gives you. ROTFL

Moral for me: I always wind up finding the items I lose…even if it takes ten years. LOL